Opening of 3rdInternational ISCAR Summer University “Moving with and beyond Vygotsky” 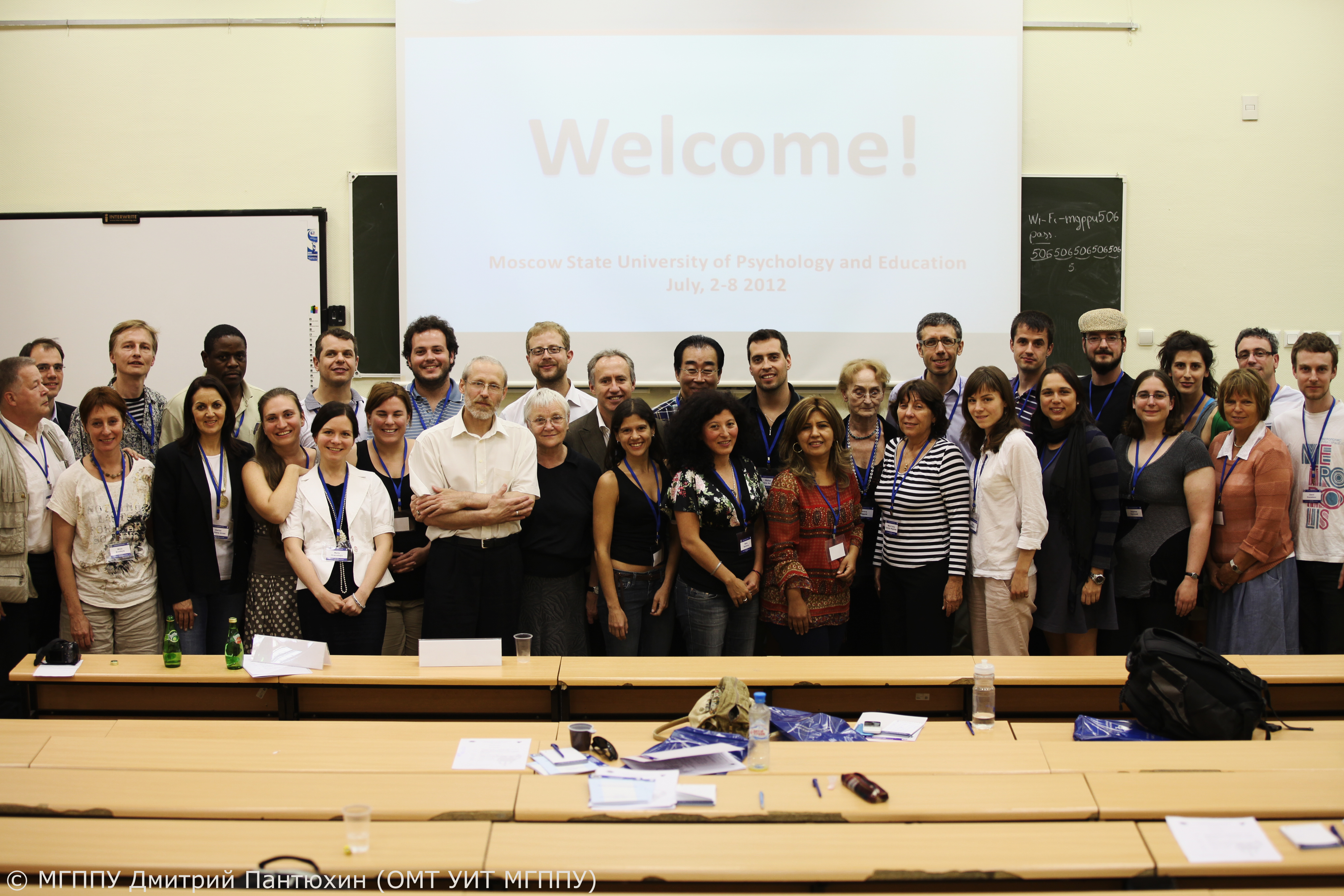 Dear friends! The III International ISCAR Summer University “Moving with and beyond Vygotsky” has begun! The opening ceremony took place in MSUPE today, on July 2, 2012. After a traditional welcome address from the Rector of MSUPE Vitaly Rubtsov, the opening lecture and discussion on anthropology and education was given by our special guest Prof. Christoph Wulf. The day continued with a lecture on psychotherapy as a research method by Prof. Fyodor Vasilyuk. After a commemorative glass of champagne the participants travelled to Povedniki resort, happily avoiding Moscow traffic. We are looking forward to the following days of the Summer University!

The second day of the ISCAR Summer University has passed

This first working day of the conference was essentially methodological. Issues of methodology of cultural-historical psychology were discussed and it’s basic notions were clarified. Young scholars and professors initiated a profound and lively dispute on the history of cultural-hstorical psychology and it’s applications in the modern world. Professors P. Hakkarainen, D. Lubovsky, S. Veggetti, M. Dafermakis, M. de la Mata addressed the meeting with lectures.

The third day of the ISCAR Summer University

The third working day started with the presentation of professor Yoshinobu Shoy, which was about Narrative Poetics. He described a promising interventional research design and practice as well as research on the development and recovery processes. He talked about self regulation in Spinoza’s perspectives. He also stressed the importance on Vygotsky’s work about higher mental functions, ZDP in teaching learning and play and social solution in defectology. 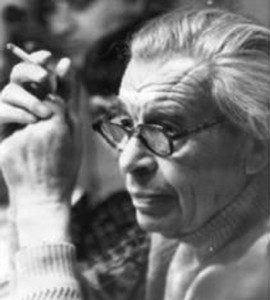 Professor Liudmila Obukhova presented an approach about the criteria for genesis of new quality in mental development in early childhood. This approach provided an insight of research activity in the pre-school education, for solving practical problems of the development of child’s thinking and of defining the cognitive activity level of development. Professor Obukhova, stressed the importance on the principle of differentiation of emotions. In conclusion she showed an interesting documentary film about the life of Daniil El’konin, student of Lev Vygotsky (information at: http://www.marxists.org/archive/elkonin/index.htm).

Today many of the 2012 Iscar participants went to Moscow for a city tour. The day started in front of general Jukov’s statue, where we awaited for our guide Elena. From there, we entered the gates of the Kremlin, but before we all took pictures and made a wish by throwing coins down on the point zero of the city.

Inside the fortress walls, we took a look around while listening to some of the historical facts about the place. It was there that we discovered that the name Red Square has nothing to do with communism or the color red, it just means what it is, beautiful! Unfortunately, we didn’t have more time there. The next part of our tour was to be done by bus, so we went to find it.

Our first bus stop was at Cathedral of Christ the Savior. Many of the boys were disappointed because they were not allowed in the church since they were wearing shorts. All of the girls had to put a scarf over the head and a sweater to cover the naked arms. But it was a worthwhile visit.

The Novodevichij convent was our next stop. There we took many pictures of the building that dates back to the 16th century. Next, the bus made its way to a higher part of the city so we could visit the main campus of Moscow State University. It was certainly impressive and, for many of us, it was the highlight of the tour, although we all wished we had had more time to go inside and wander around for a bit.

By 2 p.m. we were all starving! So we stopped at old Arbat Street for some lunch and souvenirs. After that, we drove to see the park of glory and took a tour of the Tretjakov gallery museum. The pictures we saw were undoubtedly of great relevance, to the history of Russia and they gave us a more clear view and understanding of the country’s path.

Finally, we arrived at the University, at the Psychology department, where we had the opportunity to sit we many before us sat to create the very ideas we here to discuss. 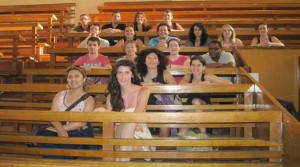 The fifth day of the ISCAR Summer University

Arcady Margolis, in his presentation started from the gap between university courses and teaching practices, to rise the question « how to train teachers to organise teaching activities in order to stimulate learning activity in students. It emerged from the discussion between the participants several elements, as the importance of teachers’ reflexion on themselves, the observation of the classroom, the student’s points of view. We also mentioned that we should think teacher as a learner, meaning that we should teach teachers in a way they should teach students in this perspective.

Harry Daniels talked about moving with and beyond Vygotski. With, in the main idea that enable young people to take part in the society mediated by cultural tools. Beyond in the way of trying to understand the implicit and the invisible mediation. We then need to go beyond the explicit to go beyond Vygotski.We also need to go beyond the Institutions : how Institution shapes talk and talk shapes Institution, seeing the talk as a work. Related to this latter point, we discussed about the concept of identity, which we multiple identities.

The Ph.D. students’ presentations of the day pointed on many concepts as well as many methods that we will expose here. Regarding the concepts, we pointed on awareness, will, conscious, control, subjectiveness, agency, intervention, everydayness, unconsciousness, culture and unit of analysis. This latter can also be seen as a method. The other methods that were mentioned in the presentations are hypotheses, the use of Engeström theory and unit of analysis, categories of analysis, the role of the researcher, the role of theory, the analysis of process, of product, and ethnography.

The sixth day of the ISCAR Summer University

This day opened with an extremely important talk about methodology and theoretical concerns in research by professor Maria Cecilia Camargo Magalhaes. Her talk focused on collaboration and contradiction. She emphasized on the critical movement to establish conflicts motivated by diversity in research participants. Her methodological talk was anchored by the Frerian methodology and the Vygotskian concept opf ZPD. Participants were given group task to reflect on their own research and reflect on their theoretical-mythological issues in their different research projects.

The presentations presented today were mostly about using Activity Theory in educational practice – schools, kindergartens, higher schools. One of the major goal was to create such environment, where one could not only get knowledge, but develop his or her personality as a whole. Among the questions discussed after all were the role of mediation – what is it? Is it a language, cartoons, pictures, etc. or the way the teacher or researcher present them? Further questions were: How can we select data for analysis? What do we generate suitable data?

There were 8 presentations by doctoral students: Clarice; Delphine, Eleni, Juliano, Sule, Stephanie, Carolina and Asta. It was inspiring to note that presentation and the subsequent discussions raised critical issues around theory and methodology in research.

The day was closed by another reflection on methodology; Ethnography in education well presented by Michalis and Martin. The idea of unpacking the term ethnography was very useful to the participants. The video used really brought to the surface some tacit issues that would be very valuable to the ethnographer.