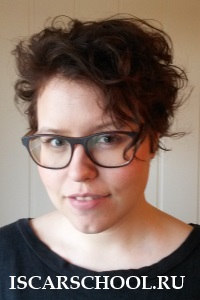 Thesis: Being and becoming. Studies of educational paths and future dreams among youths in vocational education programs

For the time being my main theoretical struggle is concerned with my understanding and use of identities or identifications in respect of adolescents.  With a methodological inspiration in Phenomenology, and what Merleau-Ponty refers to as the flesh, meaning the contour and outlines between things, I am very interested in the different ways we come into being as and for each other. Along with that question I am also engaged in the question of how we as scientist make us selves accessible to that knowledge. That is, methodological reflections about how we tune into our research field of identifications. In that regard I am interested in further exploring and discussing Vygotskys notion about tool-for-result and the relationship between method as tool and as result – as put by Vygotsky: “The search for method becomes one of the most important problems of the entire enterprise of understanding the uniquely human forms of psychological activity. In this case, the method is simultaneously prerequisite and product, the tool and the result of the study (1978:65).

I follow Holland et al, when they, with inspiration from Vygotsky, conclude that “Behavior is better viewed as a sign of self in practice, not a sign of self in essence” (Holland et. al 2003:31). Very much like John Donne, I am of the perception that “No man is an Island, entire of itself; every man is a piece of the Continent, a part of the main (Donne in Jenkins 2008), which means that identities should be understood contextual and historical, and as a process rather than a thing. That is, as something one does, rather than something one has. From that follows that identities or more precisely identification should be viewed as ongoing and open-ended processes (Jenkins 2008:9).

I understand identities in plural and as a combination of different senses of self and available and ascribed positions. Identities are in that perspective both senses of one’s own personal qualities, abilities and history, and how own is placed in the social landscape, how one relates to other people and different social classes and communities (Gilliam 2009: 25).  In saying this, I feel it necessarily to note, that I do not regard identities as something one can choose freely, but as something, that also comes about as a result of categorizations done by others. We all assign other people certain values and expressions and categorize them, because precisely that mechanism and sorting is a way of relating to others and attain an overview of the social landscape we find  ourselves embedded in (Jenkins 2008: 6-10). These classificatory models of self and others, are as Jenkins notes ”unlikely to be internally consistent, and may not easily map on to each other. Hierarchies of collective identification may conflict with hierarchies of individual identification” (Jenkins 2008:6). As Nordberg has pointed out, that means that our ”I” is both limited and rendered possible by identification with the possibilities and impossibilities, that are made accessible and are being created in different contexts (Nordberg 2010).  Like Holland et al, I object to a completely anti-essentialism that rejects any sense of durability or predisposition in social life. I believe that forms of personhood and forms of society are historical products, intimate and public, that situate the interactivity of social practices. That means, that I “take identity to be a central means by which selves, and the sets of actions they organize, form, and re-form over personal lifetimes and in the histories of social collectivities” (Holland et. al. 2008:270)

With inspiration from Vygotsky and Bakhtin, Holland et al. roll out a complex theoretical apparatus to describe their understandings of identity and agency. With reference to Bakhtin they talk about identity in practice and launch four different contexts for identity. That is 1) Figured Worlds, 2) Positionality, 3) Space of authoring, and finally 4) Making worlds (Holland et al. 2008:270-273). The idea seems to be that practiced identities are constructs that can be described by reference to several contexts of activity. The first context of the identity is the figured world. By the term “Figured world” Holland et al refer to frames of meaning in which interpretations of human actions are negotiated. Thinking, speaking, gesturing, cultural exchange are forms of social as well as cultural work. When we do these things we not only send messages to ourselves and others but also place ourselves in social fields.  By “Positionality” Holland et al. try to conceptualize what they call the “hereness” and “thereness” of people. Positionality is closely linked to power, status and rank and has to do with entitlement to social and material resources. The positioning refers back to the cultural lay of the land, to figured worlds, and not only to some species-given universal frame.  The term or context of “Space of authoring” refers to what they call the “orchestration” of the world faced by any person or collective. The world requires an answer, so authorship is not a choice, but the form of the answer is not predetermined. This implies that we cannot escape our being in the world, but we still have the possibility of agency. The last context of identity; the making of worlds, refers to the observation, that through a series of plays, new figured worlds may come about. The basic idea seems to be that the activities of free expression, and the arts and rituals created on the margins of regulated space and time, develop new social competencies in newly imagined communities (Holland et al 2008:271).

The idea of different context for the identity, as put forward by Holland et al. is appealing to me, since it seems to incorporate the duality between identification and practicing of self – and the contexts of society and culture. At the same time I find it difficult to understand how this conceptualization can function as more than theory, and that is why I strongly believe that the frame of the ISCAR summer university “Moving with and beyond Vygotsky” may be a great inspiration, as I hope it will be an opportunity to work with and discuss more thoroughly the broad perspectives and backgrounds for the cultural-historical school. To sum it up, I would be really interested in critical discussions about Vygotskys notion of tool-and-result as well as in-depth reading about understanding of self in relation with and in development with society and culture.