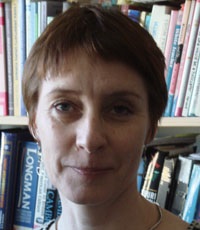 Milda Bredikyte is a senior researcher and lecturer at the Lithuanian University of Educational Sciences, Vilnius from 2012. She teaches courses on Child development and narrative learning in play and Vygotskian theory of cultural development in childhood. She is the senior researcher in the Research Laboratory of Play (LUES) and the coordinator of research activities in the research project “Development of Self-regulation in Play”.

She worked at Kajaani University Consortium, University of Oulu, Finland 2002-2010. She has taught observation and documentation methods of young children, learning and development through play and creative drama. She was responsible for the organization of university courses and research activities at the research laboratory on children’s play (Play Lab “Silmu”) since 2002. She has gained her degree as an artistic director of drama and puppet theatre from Saint-Petersburg State Theatre Arts Academy in Russia. She has directed 11 performances at professional puppet theatre and on Lithuanian national TV. During her working career she has been teaching at Vilnius School of Education and at Vilnius Pedagogical University, directing and acting at her private puppet theatre. She was also a co-coordinator of the International “Step by Step” program in Lithuania. From 1999 until 2002 she was an expert at a national board of Lithuania of early and primary education. Her first doctoral thesis Dialogical Drama with Puppets (DDP) as a Method of Fostering Children’s Verbal Creativity” was completed at Vilnius Pedagogical University in 2001. Her second doctoral dissertation “The Zones of Proximal Development in Play” was completed at University of Oulu in 2011. Her research interests include cultural development and impact of creative activities on child development, the role of imagination in play. She has been visiting scholar in San Diego (UCSD 2008), Vancouver (Simon Fraser, 2008). Intensive research cooperation with Japanese universities (Waseda, Hokkaido, Rikkyo, Fukui) has started in 1998.